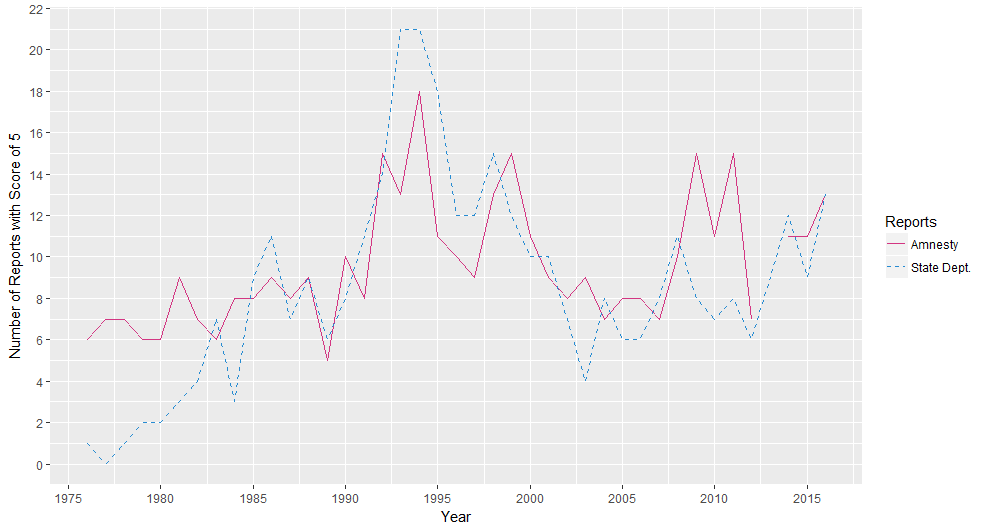 Today, we released the PTS Scores based on the most recent human rights reports from Amnesty International, Human Rights Watch and the U.S. State Department. The new scores released today cover events that took place in 2016. As such, we now have PTS scores covering a 41 year period from 1976 to 2016 and 210 countries and territories. The figure above shows the number of countries receiving the worst PTS score of 5. Not since the late 1990s have Amnesty International and U.S. State Department presented such a bleak picture of human rights practices around the world. This release includes:

This latest release, which includes all scores going back to 1976, as well as the PTS-Codebook can be accessed here: Download.

The Data Table on the website and the PTS-App have been updated and also contain the latest scores.

Changes for this Release

Last year’s version will still be available in various formats (i.e., .xlsx, .dta, .RData, and .csv) in our Data-Archive but we continue to report three sets of scores this year.

Each variable contains information pertaining to missing values in the corresponding PTS variables (i.e., PTS_A, PTS_H, and PTS_S). As missingness has been a concern to us as well as users, we coded these three variables to indicate why particular observations are not coded and scores are missing. The most common reason for missing PTS scores are missing reports. Not all reporting agencies publish reports for all countries and territories. For more details and examples please consult the PTS-Codebook.